With more than 996,000 members making up our Priority Health family, we know there are plenty of great success stories to tell. Thomas Allen is one of them.

Thomas is an artist, a Priority Health Champion and a contributing member of his community in Coloma, MI. Coloma is a small rural town in the southwest corner of Michigan.

Growing up, whenever someone asked Thomas what he wanted to be as an adult, he'd always say, "an artist." But when it came time to choose a college major, he decided to pursue a degree in criminal justice.

This decision made sense, coming from a law enforcement family. But there was one problem: criminal justice didn’t interest him the same way art always had.

Thomas eventually decided to follow his heart and pursue a career as an artist, and he hasn't looked back. His art is known by some as still-life, tabletop or staged, and essentially consists of images taken from one medium and inserted into another.

Thomas' artwork has been featured in publications worldwide including The New York Times Magazine, Vanity Fair, National Geographic and the Wall Street Journal. Take a look through some of his artwork on his website, thomasallenonline.com.

Being a self-employed artist, Thomas doesn't receive health insurance from an employer; instead he shops for his own plan. He chose a Priority Health individual plan that provides him with high-quality, affordable health care. His individual health plan also includes access to Priority Health Wellness programs.

Even with the help from his health plan, Thomas hasn't always been as healthy as he is now. In 2014, he was at his heaviest weight. That's when he decided to take full advantage of his Wellness benefits, start making healthier choices and become a Team Priority Health Champion.

In just a few short years, Thomas has come full circle. He's lost 30 pounds and gotten to the point of managing his asthma without medication.

As a Team Priority Health Champion, he has participated in multiple 5k races. And because he’s been so successful in his own fitness journey, Thomas has decided to give back by helping others do the same. He now volunteers with Priority Health at events including the Detroit Free Press Marathon and the Borgess Run in Kalamazoo. He also helps out with his local running club which will be putting on a 5k race this fall. 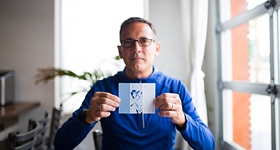