While training for the Gazelle Girl Half Marathon, Betsey Ingraham had been asked many times why she runs. Weeks after, her answer came to her, "Hope... it's why I run."

Betsey has had to hold on to hope through much of her recent life. For the past 10 years, it seemed that everyone around her was facing some kind of battle with cancer. It began when her then mother-in-law, Pam, was diagnosed with stage 4 lung cancer. This was the start to Betsey's new normal and the beginning of her holding on to hope.

A couple of years after Pam's diagnosis, Betsey faced another emotional trauma. Her husband of 12 years told her that he wanted to end their marriage. While going through over a year of divorce proceedings and moving back in with her parents with her kids, her friends encouraged her to always have hope.

And things started looking up. Betsey reconnected and married her high school boyfriend, Jeff, which brought friends, new and old, into her life, including Tina. But as Tina’s breast cancer returned and eventually took her life, Betsey was faced again with the loss of a loved one. But in Tina's memory, Betsey once again found hope.

Life was then back on track with happy occasions and good health until her beloved Uncle Bob was diagnosed with prostate cancer that eventually took his life.

Betsey went to visit her Uncle Bob for the last time. "As my brother, Uncle Bob and I prayed together I could feel my uncle's hope transferring to us. He gave us his hope so that we could share it with others."

Pam, Tina, and Uncle Bob all held onto hope and never gave up through their battles. They gave Betsey the strength to achieve her goals and inspired her to run and train for a half and full marathon. Running proved to be a healthy solution for such a stressful period in her life.

Betsey joined Team Priority Health Champions in early 2016 at the recommendation of one of her coworkers. She's used the program as a way to encourage and support others in her life to follow in her footsteps and begin their own wellness journeys. Team Priority Health has also provided her with a new sense of community as she participated in events. She also discovered, through blog posts, that there are Champions dealing with similar challenges, thus creating a strong bond.

Betsey has no shortage of motivation to keep hoping. After having loved ones go through very serious health problems, her main priority is being around for a long time for her children.

Her husband, Jeff, is also a source of motivation and support. He is also a Priority Health Champion, and cheers Betsey on every step of the way. Betsey continues to run, bike, and swim for those in her life who cannot. Her lost loved ones inspire her to reach for her goals and continue, no matter the adversity.

Through the strength Betsey receives from Pam, Tina, Uncle Bob, her kids, her husband and her family, she will finish each race strong. 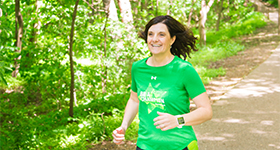