In August of last year, Ted Droski set out for work on his daughter's birthday, looking forward to their plans to celebrate later that evening. Just three doors down from his home, Ted got out of his car to adjust something in the trunk and a horrible accident occurred. Another driver struck the back of his car leaving him pinned between the two vehicles.

His life was saved by the actions of the first responders and neighbors. However, the accident resulted in the amputation of his right leg along with significant injuries to his remaining leg and lower back.

Three weeks into intensive care at a Spectrum Health hospital, Ted knew he had a tough road ahead. Recovery was difficult. It took a toll, both physically and mentally, on him and his family. But he was determined to overcome the odds.

More than a year later, Ted now has a prosthetic leg. He has incorporated a lot of walking into his routine, doing errands and following his daughter's cross country season. As a result, an existing fracture in his left leg has finally begun to heal. He has since been able to have his final surgery on the road to his new normal.

Doctors told Ted that his body's ability to recover from his extensive injuries was largely due to his good health prior to the accident. His commitment to fitness and recovery continues to help him on his journey.

As a project manager for Spectrum Health, Ted loves setting milestones. His accident made him focus on his personal milestones.

Ted said getting back to work on Feb. 1, 2016 was a welcoming experience.
"Being back, doing what I love with people who have become my friends and have supported me was a blessing," he said.

Second goal: get back to his active, competitive lifestyle

"Since my accident, I've had to change up a lot of things I used to be able to do, for the new, different things I can do,"Ted explained.

Ted has recently returned to the gym and is excited to return to a daily routine, even if the details of his workouts are hugely different. So far, hand cycling is his favorite. It allows him to train and compete in a way that is familiar to him. Ted has a new interest in wheelchair tennis and basketball. The challenge is still there.

"It's good to stay active, and get your cardio up. It's a social outing," he joked.

What being a Champion means

Being a part of Team Priority Health Champions for the past three years has encouraged Ted to continue pursuing his active lifestyle on a broader scale.

"To me, being a Champion means modeling a healthy and active lifestyle and helping lead my circle and community to participate in that same lifestyle," said Ted. "Once you put your name on the list, you have a level of accountability that many people need in order to keep up with healthy habits. Now, as an adaptive athlete, I can lead by example and encourage others who need motivation to get up and get moving."

Through the Champion community, Ted has discovered new and exciting races from other Champions' blogs from all around the state. He believes the Champion program has helped him gain new perspectives from both novices and experts through their online posts.

"I get a window into the mind of the experts and the reminder of the excitement and nervousness I felt at the beginning of my fitness journey," said Ted. "The blogs are a great way to connect with other Champions and they help me feel like I am part of a team."

There's no stopping Ted's love and drive for competition. Being a part of Team Priority Health Champions has encouraged him to thrive in a diverse community of people with the same goal: to live a full and healthy life. 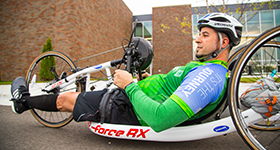 Get the care you need