This is the motto that Scott Lacey, of Kalamazoo, lives by each and every day. Scott unfortunately lost his vision six years ago but doesn't consider being blind an obstacle; instead it's something he embraces as he participates in races and triathlons year after year.

Scott was born with hydrocephalus (water on the brain). The brain normally reabsorbs cerebrospinal fluid at the same rate it is produced, but Scott's does not. The shunt that was placed on his brain after birth eventually failed. This led to build up of fluid and pressure, which crushed his optic nerves, leaving him blind. Although Scott didn't have control of this life-changing event, he is in charge of how he manages his health and wellness today.

"Our health is something that we as humans can control, to a certain extent," said Scott. "I am doing everything I can to take advantage of that and I would like to see more people take part in the same control."

Six years ago, he was 220 pounds, and couldn't run a mile. Scott began walking as a way to ease the anxiety of being blind. Slowly, he worked himself up to a light jog, and from there his passion for running took off.

Today, Scott maintains a healthy weight and competes in many races. Just one year after losing his vision in 2010, Scott ran in his first ever 25K at the Fifth Third River Bank Run, which he's continued to do every year since.

Some may wonder how a man who is legally blind runs 15.5 miles or swims in triathlons.

For his first race, Scott put a roller ball on the end of a cane and pushed it. He used the dashed line in the middle of the street to guide him. Now, he runs alongside a guide who helps him through races, and who he also considers a best friend.

In addition to running races, Scott also participates in various triathlons. This year, he has three scheduled: the Grand Rapids Triathlon, the Munci Ironman and the Michigan Titanium.

Scott is also aiming to complete the Grand Rapids Marathon this October, which will put him up for the AIM High Endurance Award for the second straight year. This award focuses on people who have made commitments and sacrifices to challenge themselves and do something most people will never even try.

This past January, Scott decided to become a Team Priority Health Champion because he wanted to be involved in a community of like-minded, supportive people. He enjoys receiving incentives for being active and earning points toward new athletic gear. And, it's an organization that supports people who want to take control of their health and wellness, an ideal that Scott believes in.

"I am learning each year brings different challenges," explained Scott. "Just because you trained one way last year does not mean that you can do the same thing again this year. You need to be willing to change and try new things, and not just from an athletic standpoint."

Read more on adversity other Champions from Team Priority Health have faced and what they've done to train and prepare for other races at teampriorityhealth.com.

The Team Priority Health Champions program is a group of people all focused on getting and staying healthy while inspiring others to follow suit. This program is open to everyone who has a passion to be and stay active and healthy. Champions are a close-knit group of people across the state of Michigan who come together to compete in races and walks and share insights on how they're living a healthy lifestyle. To learn more about the passionate people that make up the Team Priority Health community, visit the website at teampriorityhealth.com. 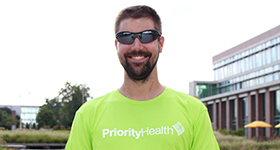